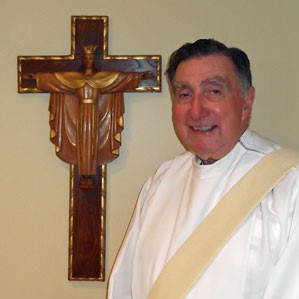 FLOOD –Francis J. Jr., long time resident of Massapequa Park, born May 18, 1930, Proud veteran, U.S. Army, after receiving his degree in Civil Engineering from Manhattan College, he received his Masters from the Massachusetts Institute of Technology.  He went to work for the Department of Health of Nassau County in 1957 and then moved to the Department of Public Works in 1967, where he served as the Director of Environmental Engineering from 1975 until he retired in 1992. Ordained Deacon May 21, 1994, Dioceses of Rockville Centre, NY, acting Deacon, St. Rose of Lima, R.C. Church, Massapequa, NY, on May 8, 2019. He was first elected to the Board of Commissioners in 1995 and had served the Massapequa Water District until 2019. He served on the Massapequa Park Village Planning Commission from 1975 to 1985 and as a Village Trustee and Deputy Mayor from 1985 to 1995. Chaplain & Color Guard AOH Division 15. Beloved husband of the late Maureen (nee O’Dea). Devoted father of Kevin and Maureen Flood, Mary Ellen and Joseph Demarco, John and Eileen Flood, Michael and Vivian Flood, Frank and Lisa Flood, Martin and Lauren Flood, Jennifer and KC Caldwell. Loving son of the late Francis and Margaret Flood. Dear brother of the late Gerard Flood and wife. Sheila, the late Elaine (Flood) Moranzoni and husband Tullio, Peggy Anne (Flood) Devine and the late Michael Cherished grandfather of, Lauren and James, Elizabeth and Eric, Michael and Cameron, Patrick and Katie, Kathryn and Mark, Kevin, John, Matthew, Ryan, Michael, Liam, Aidan, Brady, Mary Catherine, Kieran, Emma, Katelyn, Luke, Nora, Hannah, and Anne. Adored great grandfather of Brendan, Michael, Anne, Grace, Andrew, Michael. Also survived by numerous nieces, nephews and extended family in Ireland. Reposing at Massapequa Funeral Home Inc. North Chapel, 1050 Park Blvd. (at Clark) Massapequa Park Monday 2-4 and 7-9pm. Reposing at St. Rose of Lima Church Tuesday 4-7 with Mass of Transferal at 730PM. Funeral Mass Wednesday 10am St. Rose of Lima R.C. Church Massapequa. Interment Grace Cemetery, Massapequa. In lieu of flowers contributions to St. Rose of Lima Parish Outreach would be appreciated. massapequafuneralhome.com.