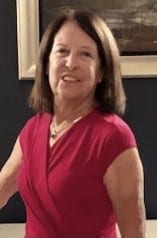 Jane Elizabeth Zutty passed away on June 20, 2021 at the age of 70. She is survived by her husband Robert Zutty of 49 years, her daughter Susan O’Brien and her husband Matthew O’Brien, her son Michael Zutty and his wife Christina Zutty, her mother Bertha Zeitler, her sister Patricia Harmon and brother John Zeitler.   She leaves behind her beloved grandchildren, Avery and Dylan O’Brien and Zack and Zoey Zutty.  She was preceded in death by her father Lawrence Zeitler.

Born September 13, 1950 in Falls River, Massachusetts, Jane grew up in Bristol, RI.  She graduated from Bristol High School in 1968, the University of Rhode Island in 1972 and Long Island University in 1976 with a Masters Degree in Education.  During her time at URI, Jane met her husband Robert on Spring Break in Florida. Upon graduating from URI and marrying Robert, they moved to Massapequa, NY, where she raised two children until the family moved to Hollywood, Fl in 1998.  For the past 10 years, Jane was splitting time between her Florida residence and Oak Beach, NY.

Jane held various teaching positions throughout her career at Catherine Gibbs and Valley Stream Central school district. Upon the birth of her two kids, Jane refocused her time on her family to raise two wonderful children.

Jane loved to be outdoors. She would ride her bike for miles either on the Jones Beach bike path or the various paths down in Florida. She loved to read a good book, often sitting at the Biltmore Beach Club watching her kids play in the sand.  Jane loved to cook and would share the best recipes, especially new ways to cook salmon or skirt steak.

Jane was such a people person and her family was the world to her.  She always offered to babysit the grandkids, helped them build sandcastles on the beach and hosted countless sleepovers.  She loved to exercise at the gym and talked to anyone that would listen.  Later in her life, she was a world traveler having visited such unique places as Australia, New Zealand, China and South America.

In lieu of flowers, the family has requested donations be made to St. Jude’s Children’s Research Hospital.