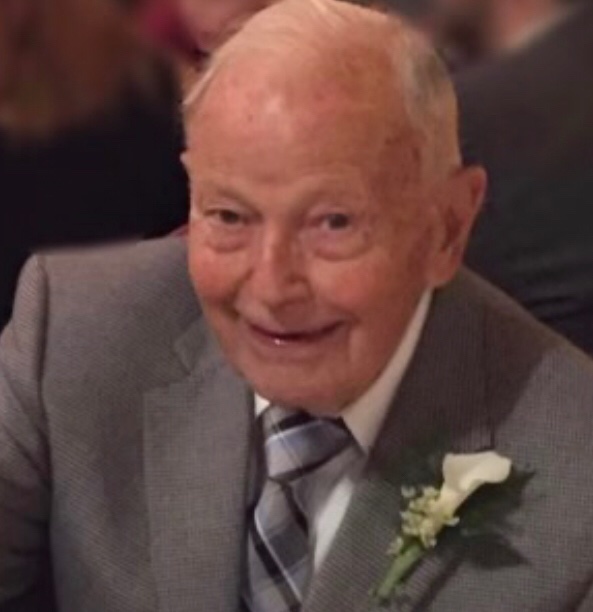 On Monday, February 28, 2022 Bill passed away at Bonaventure Retirement Living in Castle Rock, Colorado. He was two months away from his 96th birthday.

An only child, Bill was born in Queens, New York on April 16, 1926 to William and Lillian (neé Bartel) Fischofer. He attended Richmond Hill High School and was a star on the swim team. Upon graduating with honors, he attended the New York State Maritime Academy now known as Fort Schuyler in New York. He was an ensign on active duty in the US Navy during World War II and in the Merchant Marines.

Upon his return from service, Bill was introduced to Muriel Picoli in 1953 at a Catholic Church dance. They were married shortly after on May 15, 1954 eventually moving out to Long Island.

Determined to have a large family, Bill and Muriel had five children. They loved the water – and moved to Searingtown Long Island where they lived for 24 years. Summers were spent sailing aboard the “Nereid” catamaran on the Long Island Sound, taking their children to swimming lessons at the Williston Park Pool and enjoying the sun and sand at Jones Beach. Bill was a sharp guy with an engineer’s mind so he loved to tinker and was also a gadget guy. He owned the first microwave oven introduced by Amana Corporation in 1967. He built solar panels to heat the family home along with a solar cooker that was used in the backyard as a grill. He even built his own sailboat/rowboat, which he named Puff.

Bill worked for the Board of Education for the City of New York for 30 years as a Custodian Engineer. His last school was Francis Lewis High School and he made sure the building operations ran like a clock. His wife Muriel worked alongside him there and they both retired in 1992. In retirement, Bill and Muriel traveled to Japan, Ireland, England, and Greece. When they finally stopped traveling, they settled once again on the water in East Marion, New York and Deerfield Beach, Florida. Bill and Muriel moved to Raleigh, North Carolina in 2013 to care for Muriel after she was diagnosed with Parkinson’s.

Upon Muriel’s death in March of 2019, Bill stayed on in Raleigh where his daughter Carol Hahn supervised his medical care. Always an adventurer, Bill made the decision to move to Castle Rock Colorado in April of 2021. He was done with the Pandemic, needed a change and wanted to spend time with his son John, his grandson Tim and his two great Grandchildren, Sara and Jack.

Bill loved his wife, loved his family, loved watching football, was quick with a joke and was known for his decades long pastime of smoking his pipe, along with a nightly vodka martini on the rocks with a twist. One of his favorite lines was “live to 100, very few people die after 100.” While he didn’t quite make it, his family’s fond memories of him with live well beyond that 100-year marker.